Getting Tumbled in the Impact Zone

Ok, so I realize that not everyone reading these posts will understand the very obscure surf terminology that I use. I thought it might be beneficial to break it down so you can follow along for the next two weeks!

Alright! Now we’re all on the same page!

This morning I woke up at 4:40am to be ready for a 5am surf session. We were taking a boat out to the next bay, and we weren’t coming back until noon. Even for me, that seemed like a long morning of surfing.

After eating a filling breakfast of pancakes and oatmeal on the boat, we slathered on our sunscreen (waited the appropriate amount of time to let it soak in) and headed into the break.

I can’t decide if my pop up (the part when you stand up on the board) is a little weak because 1) I’m sore 2) the cut on my heel is still healing or 3) I just need to practice my pop ups more. Probably all three.

After riding a few good waves but with a weak pop up, I got trapped in the impact zone and couldn’t get back to the lineup. I tried to paddle my heart out to reach the channel and into calm territory, but I just kept getting hit by break after break. After two sets of getting pummeled by waves crashing over me, I was at my limit. One wave was so large that it kept me under for a long time. Like – I started panicking for air. Kind of a freaky moment.

By this point, I felt done. I was so exhausted. Every part of my body was tired, and every muscle was already sore. On top of that, I was recovering from a pretty decent sunburn from the day before.

Unfortunately, we still had about two more hours of surfing.

I headed back to the boat to grab some water and rest for a bit. It was very tempting to just chill on the boat and listen to some beachy tunes. However, after a good break, my body wasn’t tired anymore. It was simply my mind being weak. I forced myself to put my rash guard back on and get back in the lineup.

I caught three more waves with better pop ups! By that point, I could feel the sunscreen wearing off again and needed to head back to the boat. But I felt good that I won a mind battle and got back in the waves. Sometimes your mind needs to just stop being so lazy. 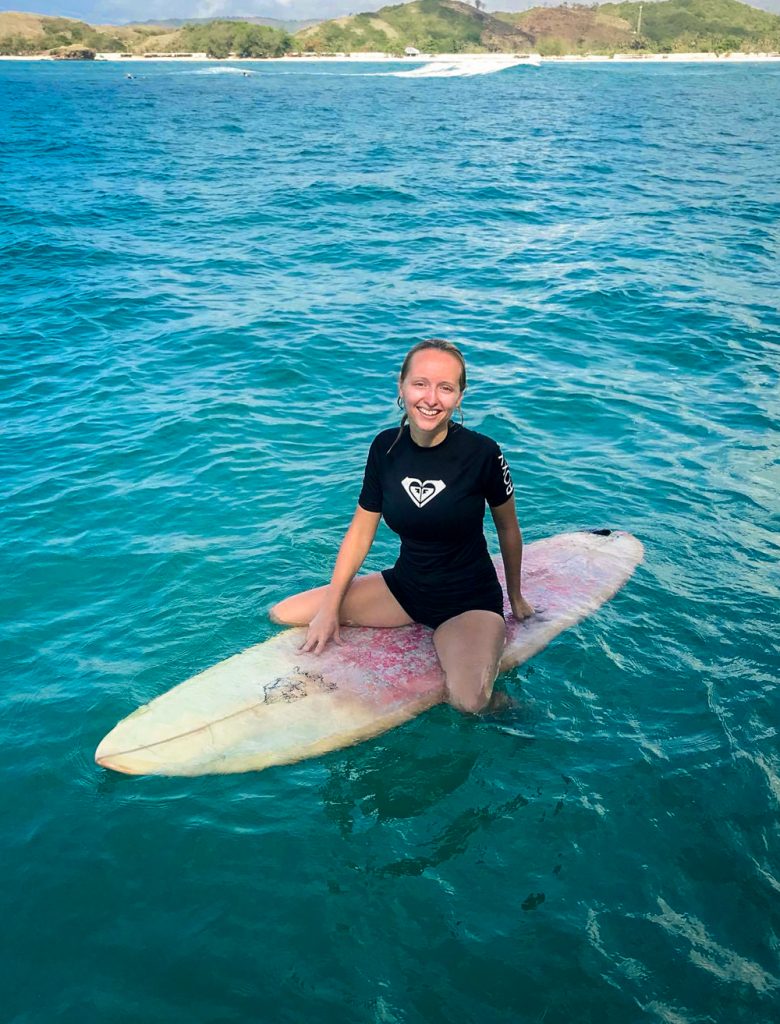