And just like *snaps fingers* that – it was time to leave Kotor. I think after having stayed in Dubrovnik, I needed Kotor. I needed to believe in culture and authenticity again.

Gonna miss ya, Kotor. Now on towards Sarajevo!

Fun fact – there’s only like one bus that goes from Kotor to Sarajevo … and it’s about 12 hours (the actual distance is about 5 hours). So that sounded like a bad option.

My hostel, however, offered a van transfer to Mostar where I could continue via bus towards Sarajevo. The van would be about 3 hours and the bus ride would be 2 1/2. A much more appealing option.

I arrived into Mostar around noon and was a starvin’ Marvin. Food was pretty high on the priority list. One of the local dishes to try is Pljeskavica. They really like their meat here. And I’m ok with that. 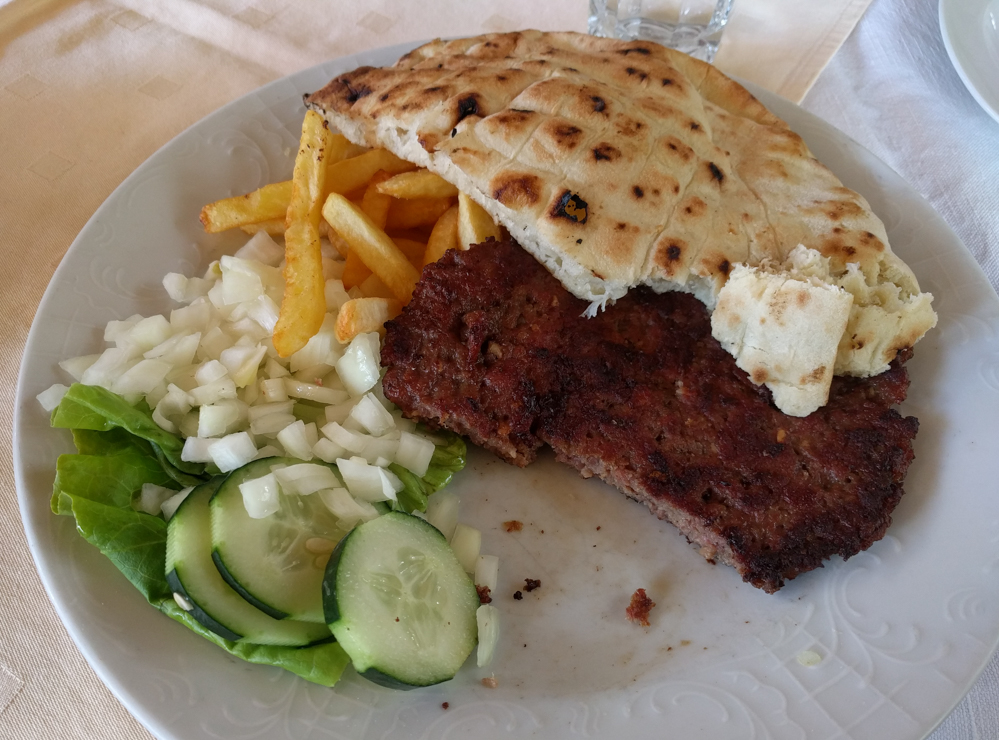 I checked out the famous bridge and almost slipped down it twice. The tiles are super slippery. Pair that with the rain puddles from that morning, and it’s practically a death trap.

I continued on towards Sarajevo by bus. And would you know it – this bus ride was actually ok! It was on time, didn’t make me sick, had limited stops, and had a decent amount of room. PLUS I saw the end of a rainbow while on it. I shoulda jumped out to find my pot of gold, dang it. With that, maybe I could afford to stop off at the Maldives later. Haha!

After having stayed four months in hostels, I really wanted to treat myself to an Airbnb. I wanted to sleep in a room with no one else in it. I wanted a big bed where I could lay on it starfish style. I just needed a break from everything.

I arrived at my cute Airbnb around 8pm after struggling with the Sarajevo tram system for 45 minutes. I could’ve walked, I suppose. But it was rainy and cold and meh. I got here eventually.

This will be the best sleep ever.

← Previous post: It's a Long Way to the Top (If You Wanna Rock N' Roll) Next Post: Alone in an Airbnb + Beginning of a Vlog Series! →