Becoming Friends With a Portuguese Actress

So, story time with Meagan:

Last night, a few of my hostel friends and I headed out to find Fado music in Lisbon. We were recommended a local spot, and we were eager to hear what it offered. Unfortunately, it was super small and super packed. So instead, we went next door to hear a Brazilian band playing live music.

As you do in Lisbon?

The place was pretty crowded, but I spotted a few open seats close to a table of two Portuguese girls about my age. I walked up and asked if the seats were taken, and they gladly welcomed us. We then started a wonderful conversation about Portugal, where we’ve been, and what they recommended.

Later into the night, two of their friends joined our table, and that’s when the truth started spilling out.

At first it didn’t make any sense. The four of them were making jokes about TV shows and movies, and I had such a blank expression on my face. One of the guys leaned over and said, “Do you not know who she is?” I was like, ummm no …

“She’s an actress here in Portugal.”

Oh. How about that. Her name is Alba Baptista.

Another fun fact – the guy who informed me of this was a monarch to Portugal.

It all sounded so outlandish. Like things locals tell stupid tourists. But it actually all checked out (thanks Google).

But here’s the thing – I never get starstruck. It never made sense to me because they’re just … people. So I carried on into the evening like before, and Alba and I became quick friends. She’s very caring, down to earth, and the type of person you cherish in your life. I’m actually genuinely sad she lives in Portugal and I live in the United States.

So fast forward to today:

Alba had a week off of work and wanted to know if I’d like to go to the beach with her.

We met up with her friend Pedro, stopped off at a grocery store to pick up snacks, and took a train out to the beach. And we just beached for hours. We talked, laughed, and ate. Just a solid afternoon with solid company.

I also had McDonald’s for lunch. As my friend Andrea would say, “You’re living your best life.” 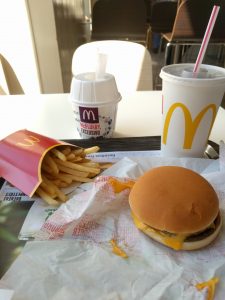 ← Previous post: A Day of Plotting and Planning Next Post: When It All Goes Wrong, Buy Ice Cream →