A Hike Up to Key Summit

Today was a flood of emotions.

I woke up this morning to several texts letting me know that one of my friends back in the Gold Coast had died. From the news that I got, Tom went out swimming with friends, but the current was too strong. He crashed into nearby rocks and was taken out to sea. His body was later recovered by divers.

It all just didn’t feel real. This happens to other people – strangers in newspapers. Not Tom. Not someone who I’ve gone surfing with, laughed with, enjoyed life with. Even as I read the Australian news article, my brain couldn’t comprehend the tragic news.

The world lost a bright and loving human.

With the news still weighing heavy on my heart, Molly and I headed out to Fiordland National Park to hike part of Routeburn and to the top of Key Summit.

It was only about a 4-hour return hike, but I swear it was nothing but switchbacks. By the end, we were standing at about 2,754 ft. The views at the top were well-worth the effort. Absolutely stunning. 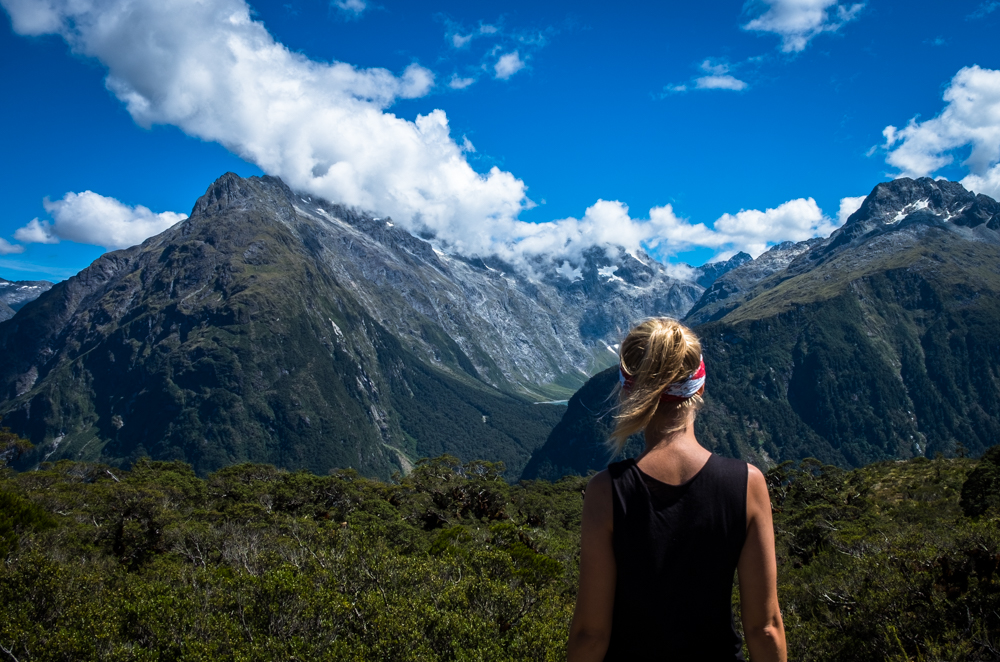 By the time we headed back down to the carpark, our legs were feeling a bit exhausted – but mostly my stomach was super hungry. I was very eager to get back into town, and unfortunately, that may have effected my driving speeds.

Y’all – I got my first speeding ticket, ever.

I was coming down a hill into a long, straight part of the highway, and I got a little pedal happy – straight into a speed trap. I got pulled over for going 113 kph in a 100 kph (I was basically going 69 mph in a 60 mph zone). The police officer was super nice which I was relieved about. But just over the officer’s shoulder, a man had a big camera pointed at my face. What is happening??

Apparently they were filming for the New Zealand national TV show called Highway Cops. I kid you not.

The police officer and I chatted quite a bit about Texas and our faster highways. I can’t say this enough – he was super nice to me. When he walked away with my driver’s license, the cameraman then made his pitch about being on the show. I gave a resounding no.

When they both walked away from the car window, that’s when the tears came. I couldn’t help it. I’m such a goodie goodie, and I hate getting in trouble. I tried to brush the tears away before the officer came back, but it was no use. When he saw the tears, he dropped his head and said, “I feel so terrible! You’ve completely ruined my day now!” We both laughed, and I tried to stop the leaking facet on my face.

I walked away with an $80 NZD ($62 USD) speeding ticket, not an appearance on a New Zealand reality show (did I mention that I was a crying girl wearing an AC/DC t-shirt and an American flag bandana?), and a reminder to obey the law.

Fun fact – one of Molly and I’s friend from town also got a speeding ticket that afternoon on the same highway. So I felt a little better about it … haha sorry Thomas!