Hiking Around the Blue Mountains

Here’s just how much research I did on Sydney tourism before I arrived: I didn’t know about the Blue Mountains. When I first came to Sydney, Tim asked me what my plans were while I’m here. I named off a few of the normal things – Sydney Harbour Bridge, The Opera House, botanical garden, Bondi beach, etc. When he discovered that the Blue Mountains weren’t on my list, he told me they were a must.

So today Tim and I took a road trip to the “must-see” Blue Mountains. And I’m so glad I went.

The Blue Mountains are about 1 1/2 hours from where I’m staying. On our ride out there, I asked Tim why they were called the Blue Mountains. What was so blue about them, anyway? He was like, “ … I have no idea why.” Haha zero help, Tim.

We decided on seeing the Wentworth Waterfall lookout, hike the Pulpit lookout trail, and finish with the Three Sisters lookout. With our plan sorted, it was just a matter of walking (hiking) it out.

When I approached the first lookout, the name “Blue Mountains” all made sense. It’s not that the mountains are particularly blue, it’s that the shadows make them look blue. And I thought that was just the coolest thing. 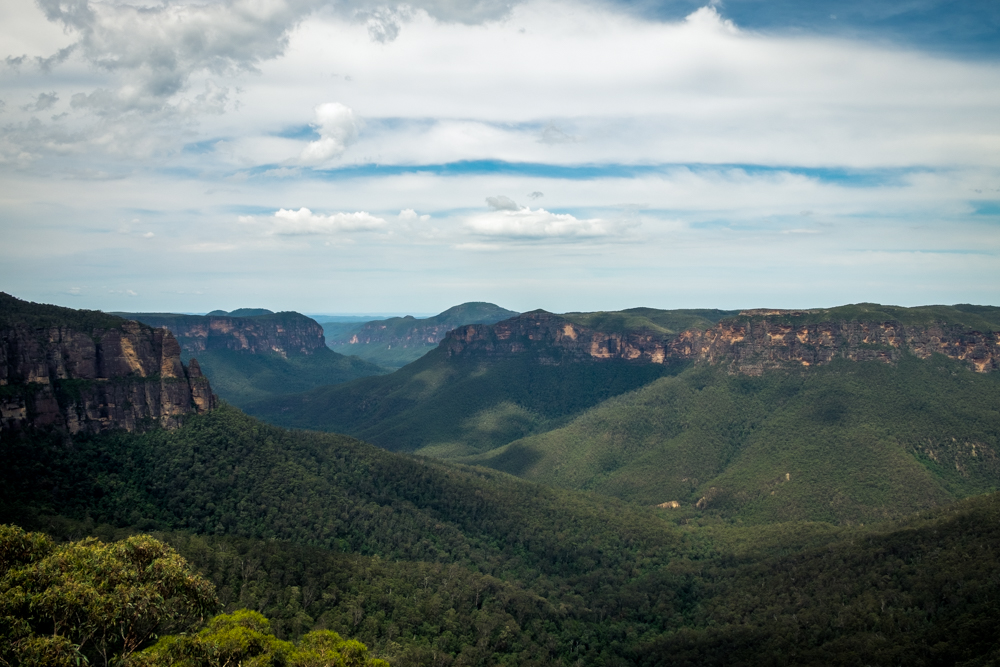 After the Wentworth lookout, Tim and I began our 3-hour return Pulpit Trail hike. I loved every minute of it. Mainly because I love nature and any excuse to be in the middle of it.

It was a pretty moderate hike. Tim and I both have Fitbits, and we often compared (competed) our steps and heart rate. Overall, we walked about 15,000 steps and an equivalent of 113 flights of stairs. Those stairs were killer.

By the time we were done with our hike, we were pretty exhausted. We drove to the Three Sisters lookout and had the opportunity to hike closer for a better view, but we just looked at each other and were like – nope.

Around 5:00pm we headed off to grab some much needed food and then headed home.

We got back to the apartment at 8:00pm, cleaned up, and played Phase 10 with Pat and Arna for the rest of the night.

One of my favorite days in Sydney, by far. The Blue Mountains are such a must-see.