I thought I was going to die multiple times today.

Such intrigue, right?? Ok, so let me explain.

Christen and I signed up to ride ATVs through Ubud’s jungles. Sounded completely cool and standard. We got to the office, strapped on some mud boats and helmets, (did not sign any kind of release form – typical Indonesia), and got on our 4-wheelers.

This ATV experience was like nothing I’ve been on. It was equally fun, life-threatening, and a hot mess.

Our tour guides took us down insanely steep hills thick with mud from the recent heavy rain. Don’t mind me, just going head first to my doom. Also added adrenaline points for when my ATV chain came off – twice – while gunning it up a hill.

Let me repeat – I never signed a release form.

Then they took us through a cave that was literally barely wide enough for our 4-wheelers. Oh, and a foot of water covering the bottom. Oh, and boulders causing my 4-wheeler to go in all directions. Y’all. I saw my life flash before my eyes.

But through all of the dangers – and the constant 4-wheeler break downs – it was actually a really fun time. And most importantly, I didn’t die.

Continuing the harrowing experiences of the day, we headed to Ubud’s monkey forest. And I must confess that monkeys terrify me. There’s something weird and creepy about them. They’re not cute. They’re not cuddly. They’re disturbing. But Christen wanted to see the monkeys, so like the good friend that I am, I regretfully went.

I didn’t even have food in my hand, yet monkeys would run up my back and sit on my head. I had to keep calm and not panic, but I really wanted to grab and throw those monkeys off of me. I was not into it.

But despite the lack of magical monkey fun, I still had a fun time. Why? Because of Christen’s face. I was dying from laughter. 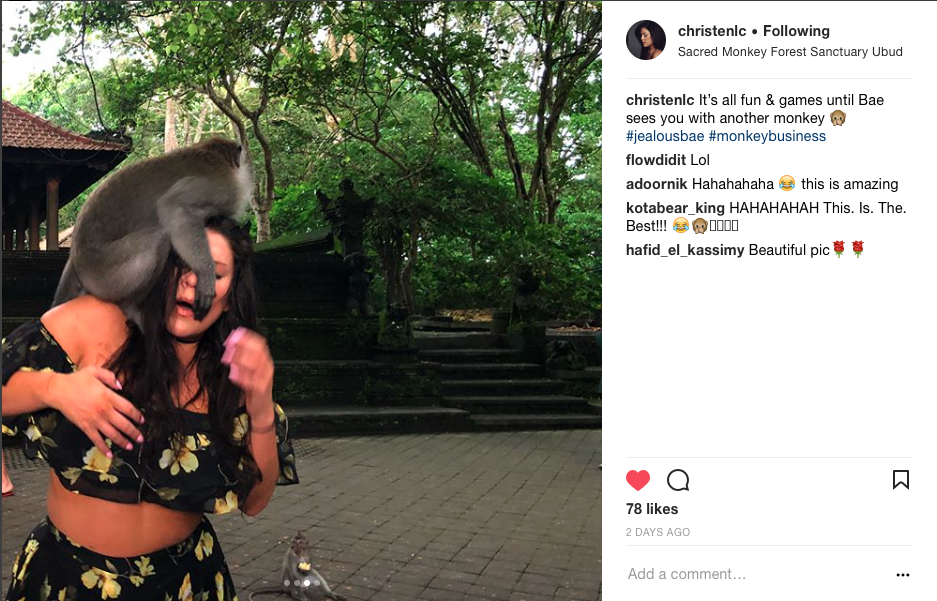 And at the end of the day, I was still alive. So you know what? I guess it was all ok.